Inner maturity goes hand in hand with an inner balance. That's why symbols of inner maturation often refer to tense initial situations which have been integrated through insight and experience and now serve as accepted experiences to the personality. The dissolution of tension and aggression caused by unsolved problems, situations and statements (f.e. from conflicts between moral and needs) is in corollary dreams, that are accompanied by a solution (maturation), often hallmarked by a religious eschatological dignity.

Fruits (and their color symbolism)

Fruits were an essential part of human diet for centuries that's why they play an important role not only in folk art, fairy tales and myths but also in dreams. 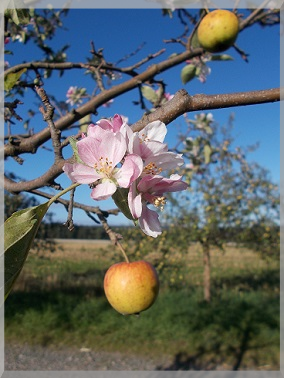 The fruit is the final product of a vegetable development but also the seed for a new living being. Therefore, it can symbolize a completed experience stage which in turn is starting point of a higher maturation process. There is a difference between the fruit of a herb growing on the ground and the fruit of a tree. The tree strives towards the sky and topologically complies with the mountain hence an increase of consciousness. The herb on the ground is close to the border of the unconscious.

If we think of the color symbolism regarding our main inner areas (see Symbolism of Colors) yellow (golden) is the color of the middle in which red (emotions, instinct), blue, white (the mental) and green (the vegetative) find their balance. Golden (yellow) fruits from the ear to the apple had therefor an important meaning ever since.

V.: “I wandered along a summery field path. I had the feeling that the fruits of my life would grow on this field. On the left side was a wheat field with some blank spaces. There I saw some strong, golden wheat stems growing. To the right I saw a mountain of gravel as high as a house. I was frightened when I realized that these stones were obstacles in my way that I would have to remove throughout my life.” 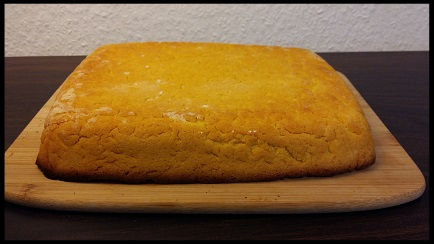 The making of bread contains a chain of symbols: from the bread dough (immature) is - through the heat of the oven (maturation process) - the golden-brown loaf of bread (product of maturation) made. In addition to the symbolism of the inner development the bread also comprises the symbol of the circle. C.G. Jung gives it special attention as he describes the circle (Mandala) as the self symbol in its most fundamental form. The circle inheres the familiar and the related – family circle, circle of the chosen ones, etc. Who managed to “round off” his “shattered personality” has found to his inner harmony.

Symbol summary of the bread

bread: Together with the ear it's a summer and sun symbol which is connected to the color yellow resp. golden. It is also a mental-spiritual nourishment of the religious people (see Bible).

Diligent Girl: She takes the golden-brown bread out of the oven and gathers the golden apples. She has been covered in gold.

Idle Girl: She burns the bread and it becomes black (=unconscious). She doesn't gather the apples from the tree so they become foul (also become black). Too much heat of the oven and too much heat of the sun spoiled bread and apples. It is the heat of untamed emotions and the heat of unrestrained sensuality that is being destructive.In the end the idle girl is being covered in pitch (black=unconscious).

Religiously gold is assigned to the heavens while pitch is associated with hell. Mother Hulda herself also embodies aspects of hell (f.e. boars teeth) and heaven (living above the clouds).

V.: “I was in a city that looked like a city several centuries ago. I entered a bakery. On the shop counter I saw a round loaf of bread. Behind it stood a female bakery's assistant that seemed more like a sun priestess to me. She was capable of telling the future by the power of bread.
She predicted bad weather to the farmers and all their persuading couldn't change that. Then a young woman stood in front of her as a customer and asked for future instructions. The bakery's assistant pressed her thumbs into the loaf on the counter and formed eyes, nose and mouth so that the bread looked like a rural sun representation. Then she told the woman about her future.”