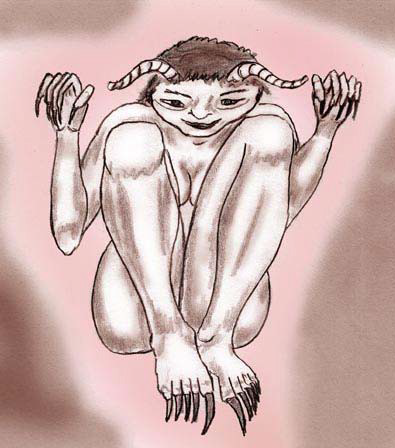 Definition: A succubus is a pseudo-life built of astral matter. In rare cases it occurs that an earth-bound spirit makes use of discharged fluidal matter to manifest itself.

Emergence and development of a succubus: In the sleep paralysis state panic can arise, which is why in this state of half-sleep the appearance of a demonic being can be surmised or seen. As a person in the state of sleep paralysis physically is in a state similar to trance, auric matter (etheric-astral) can be discharged more easily, which promotes the creation of a psychogon. The strong feelings of panic charge the psychogon additionally. The state recurs very easily, whether out of anticipation of fear or out of a desire for sexual intercourse. The repetition of the state can strengthen a psychogon in such a way that the impulse for repetition can come from the psychogon itself. An erotic "ghost"-human couple with arranged sexual intercourse develops.

Former, false views of a succubus’ behaviour: After Hartmann, a theosophist about 1910, incubi and succubi are demonic beings which owe their existence to the mental imagination of their victims. Such as the vampire – as it is known from movies and tales – weakens its victims through sucking blood from them and in that way gains vital energy itself, the incubus or succubus drains vital energy from its human "partner" although the interaction with these "ghosts" ostensibly gives pleasure. Madness and even death could be feared, but cure could be possible through strengthening of the moral powers (Dr. Franz Hartmann, "Seelenbräute und Vampirismus", p. 5 ff). (Remark by the author: this dramatical view is primarily due to the prudery of the society at that time and does not match the reality at all.)

Historical aspects: After Jewish lore, God chased away Adam’s first woman Lilith from paradise. Banished to hell, from that time on she haunts mankind as a succubus. The lore refers to the Babylonian deity Lilu, also known as Lilutu, Ardat Lili and Irdu Lili.

In Christianity, flagitious dreams or ejaculations in the night often were linked to the visitation of a sexual demon. In this way, the person suffering from these dreams could not be accused of the sin, for he/ she was only considered to be the victim of a supernatural power. But later, in times of witch hunting, sexual intercourse with the devil (also termed ‘paramour with the devil’) was seen as a willfully intended act and thus a clear sign of commitment to the devil. The devil was believed to take the form of a succubus when interacting with sorcerers, while with witches he appeared as incubus. Especially with women, such dreams supposedly were caused by so-called magic salve (witch ointment, flying ointment) which had ingredients similar to those of drugs (cf. wikipedia.org: Incubus). 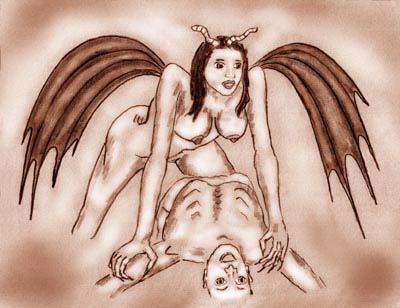