Definition: an egregor (eggregor) is a collective mental form which becomes an "independent" living being. It is brought into existence through creative thought and is sustained through thoughts as well. Mostly this happens unconsciously during religious practices. In magical practices this process is implemented deliberately, usually with less ethical ambitions than in religions. In the magical process of creation or vitalisation, emotions are more important than mental images.

An egregor is weakened if the sustainment through rituals or other forms of vitalisation are no longer happening. A strong egregor can last centuries until it fades away. It is also possible that an egregor of a deity crosses over into another, newly emerging deity, like manifestations of germanic forest or well deities in Marian apparitions. An example of a magically provoked apparition: 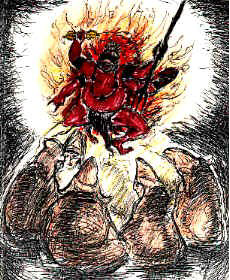 Summoning of Yama (picture by Candrapada)

Under the term "egregore" we find deterrent articles that show what abuse already has been done with such methods. A typical characteristic of such a form of magical use is the activity of lower Chakras and an egoistic motivation (mostly striving for power). Furthermore, the apparitions of enlightened spiritual masters were not made of ectoplasm but of Amrita. Amrita is only generated when the balance point of energies lies in the Anahata Chakra.