The topic "False Awakening" has also been dealt with thoroughly in False Awakening in Etheric Body. For the sake of completeness it will be mentioned here again in OBE methods, because it actually is – for some people – a relatively easy way to reach the OBE state. Here I’ll concentrate more on the aspect of false awakening as an OBE method.

As far as I can remember, I experienced false awakening in the morning for several times. Firstly, it seemed to be a special sort of dream and it didn’t seem to be worthwhile to spend deeper thoughts about this kind of dream. This point of view changed when it turned out that the false awakening state could be used as an OBE technique. Later this became my preferred method to start OBEs. Through this practice and especially through the higher state of consciousness which I had in comparison to normal dream-like false awakening, I could gain deeper insight in the mechanism of false awakening.

The common form of false awakening is observed by many people. But as the action is not dramatic, false awakening usually is classified as a kind of dream in which you subconsciously realise the morning time and the expectations of standing up, getting dressed etc. which have to follow. 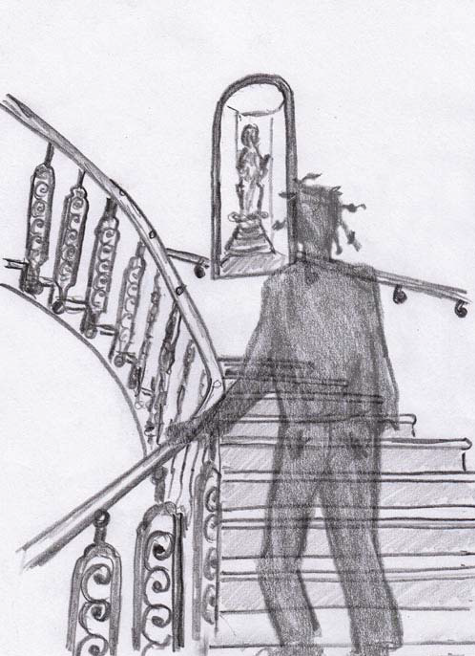 False awakening as a pre-state of OBE

False awakening as a preliminary stage of out-of-body-experiences (OBEs) can be distinguished from common false awakening in the following main points:

The conscious induction of a false awakening is accomplished in the following way:

Concentrating on such a monotonous process within a phase of falling asleep results in a kind of posthypnotic suggestive order, which is repeated automatically after the deeper phase of sleep has ended and when we are again in a phase of lighter sleep. Firstly, this automatism is continued unconsciously, but in doing so, we remember our original intention, and the following active concentration leads to full consciousness in the state. The false awakening turns into a state where we can suddenly decide consciously what we do and we can become aware of our subtle body, beginning to explore our surroundings.

I have begun to use false awakening not only for OBEs in the sense of "stepping out of the body", but also to find astral contact. Of course there are completely different affirmations needed here (with intensive longing for connection). For this it is also necessary to induce a higher, luminous inner state. This will also have an effect on the experience of false awakening:

"I sat in my chair where I used to practise, but in a considerably larger room that was empty. In front of me, the floor was littered with thumb- to hand-sized crystals which glittered colourfully. Then the colour of the crystals changed to a soft violet. At that moment, a hooded figure, coming from the left side, passed through the room. Instantly after I woke up."

"I already thought to have fallen out of deep relaxation into the normal awake state, but I tried nevertheless and the separation succeeded, I floated out of my body. With floating steps I hurried down the stairs. The path in the front garden was lined with many lush growing flowers. There also were two patches of wonderfully white flowering Callas. Fascinated, I stopped before the flowers, spellbound by their shining white. I practically lost myself in them and it became a gate of infinite space in endless silence, yet not empty but filled with a joyful and ecstatic state. I had forgotten myself and it took a while until I fell back into my normal consciousness."

"I got up at 4 AM to meditate. I meditated for a while on expansion of consciousness (inhaling through the Sahasrara, feeling vastness, with connection to ‘above’, exhaling and spatially expanding through the Ajna). At some point I fell asleep while doing this.

I ‘woke up’ again when I felt strong waves in my back, which intensified and shaked me back and forth; but in a comfortable and soft manner. I enjoyed that and let it happen. After some time, the waves reduced and I felt my ‘body’ beginning to float. I didn’t think much about my state but simply flew across my room several times. By now it began to dawn on me that this had to be an OBE state and instantly I decided to explore my surroundings."

"Before, I did the following exercises: Kundalini exercise with breathing up and down the spine. Then whisking. Subsequently I fell asleep.

But there occurred a Kundalini ascent, similar to electrical power that runs through the body but not painful. The room brightened as if through a weak flash. Then I stepped out three times:

1st stepping out: Through the Kundalini ascent I became aware of my state and woke up inside. So I waited until the Kundalini phenomena had ended and then I floated out of my body. I had a flight through the room and then I wanted to go out. I flew directly through the glass of the patio door so as not to be delayed. I shot up into the air towards the blue midday sky. I had a lot of fun. At some distance I could see mountains with rocky steep faces. I shot in this direction. I enjoyed this very much. In mid flight I was drawn back into my body.

2nd stepping out: Back in my body, I tried to hold up the state and instantly flung out of my body again. This time I wanted to go out on the street. I passed through the front door and carefully observed every difference in the environment in relation to the real physical environment. The house looked different and on the right side it had an extension that doesn’t exist in reality. The garden was larger as well. The street didn’t continue in the direction of the hill, but there was a railway line that went up there, about 10 meters away from the position where in reality the street would have been. Instead of the street there was grassland. I went down in the direction of Dornbach. It looked like at the time of the turn of the century 1800/ 1900, with low, but very nice buildings and big gardens. Yet the street was very broad and also the sidewalks. On the sidewalk I encountered a woman who said that she was going to a party meeting, and that she would like if I went with her. I agreed immmediately, because I did not only want to look at facades. The party headquarters was about 10 meters away from the street in a garden. Inside, it was a big hall with many tables where people sat talking to each other. Everything was organised well: at once someone administered to the woman. I stood there alone for a few moments and observed everything, when the party executive came to me. The whole thing did not look like a party meeting or a party, but it rather seemed as if this was only a disguise for something different. I didn’t know for what. The party executive deliberately wanted to start a conversation with me, but I refused. I asked him if he would allow me to touch him with my finger so that I could make auric contact in this way. In this manner, I thought, I immediately would have to get all information without spending much time on conversations. The executive got frightened about this and retreated step by step. Shortly after I was drawn back into my physical body.

3rd stepping out: In a third attempt of coming out, I was in my room. V. was there as well and I wanted to come into contact with her. The examination of persons in false awakening was my testing area at that time. But unfortunately I didn’t got that far because I was woken up by some noise."