Depending on how energy currents are flowing or not, various side effects occur – accompanying effects of Kundalini. Many people are proud that their Kundalini is "active". They justify this with sensations of heat in the spine, pressure at the coccyx etc. But these symptoms are misunderstood! Here, the interpretation of an "active" Kundalini is only based on its side effects. Those people think that the stronger the side effects are, the stronger their Kundalini has to be. But these side effects are occurring when there are frictions or blockages – that means, when the energy channels are weak in relation to the amount of energy which is flowing through them. When the body is optimally adaptated, Kundalini’s power cannot longer be interpreted with side effects. An active Kundalini can rather be recognized by the inner power that the person possesses, and not by heat, prickling, pressure or similar effects. It is comparable to a conductor – if the wire is too thin and the electric current too high, the wire will get hot. It is a great mistake to think that the current is only flowing when the wire is hot.

Kundalini after Indian yoga: it arises from the Muladhara chakra (four-petaled lotus) and opens out into the Sahasrara chakra (crown chakra) – or into one of the lower "windows" (other chakras)

Various energy currents are flowing inside our body. In addition to the energy currents which are running on the surface of the human body, there are others in which an energy exchange between inside and outside takes place. One essential energy exchange which is referred to as "Kundalini ascension" goes from the ground up through the governing vessel (acunpuncture) or spine (yoga) and opens out into one of the chakras, but mainly into the crest or crown chakra, from where it disperses on the surface and flows down again. 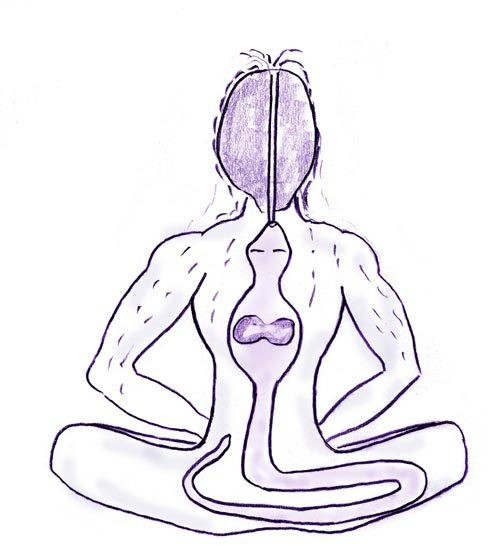 The inner flowing of energy starts at the point where we touch the ground – that is in a sitting yogi the base of the spine or at the perineum. It is generally thought that Kundalini arises from this region. There are differing methods in Hasidism (Jewish mysticism), where the energy is led up from the soles of the feet (e. g. vocal exercises IEOUA – Jehova).

In Indian yoga (Tantra) we find the idea of two additional important channels (nadis) which are twined around the central channel in three and a half coils. Those two channels are called Ida and Pingala. They lead a warm and a cool energy current. It seems that a depiction of these two channels, which are winding around the central channel, has found its way over the Orient even to Europe – as the wand of Hermes. 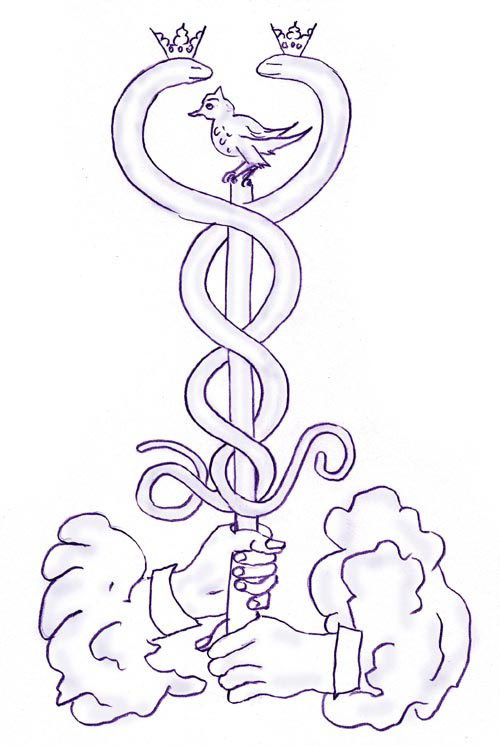 The wand of Hermes