When mentioning chimera, I mean auric split-offs (psychogons) which are built from the substance of a person and which are controlled by a transcendent being.

Psychogons that have been developed into chimera are mental creations, which become a virtual reality to the creator through strong emotions and vivid imagination. The person can see this mental image before him as an object or person. If this created psychogon has the appearance of a person (or being), it is possible to connect to this being through interacting (reciprocal) energies. It is the same principle as with magic connection and influence through images and statues. Corresponding to how much spiritual energy is soaking into the created mental picture, the more or less dense and alive such an image will be. In the above excerpt about Ramakrishna it could clearly be seen how the energy flows from Ramakrishna into the phenomenon and how religious contents are being reflected like an echo. In Maha Yoga there exists the practice to build a psychogon which is controlled by the conscious mind of a deity, as soon as the heart chakra has been evolved.

Below an excerpt, containing an instruction how to transform a psychogon with the appearance of a succubus in a way, that a deity (Lilith) is able to appear in its place.

From "Lilith" by Alfred Ballabene: Michael knew that Lilith could read his thoughts, maybe she even had brought back this analogy into his mind. Thus, he bluntly asked Lilith: "Can you teach me the love of the completed?" Lilith looked at Michael, gravely. "I can show this love to you by transmitting it to you, again and again, only for some moments. To make it a quality of yourself, you have to stabilize it and this will take many years. A close contact would intensify this transmission. This advantage has its difficulties, as most things in the world. I would have to descend from the sphere of pure consciousness into a body, although I normally don’t have a body. This, however, is only possible when your aura is so pure that a body built from this aura will not hurt me. The succubus which annoys you is a phenomenon built from your auric substances. It is a pseudo-life, which has built from your astral matter. Suppressed aspects and inner conflicts lead to a demonization of the female aspects inside of you, which is why this phenomenon looks like a demon. What you have created here is called a ‘psychogon’ in your recent language use. This psychogon is controlled by your subconscious. If you succeed to raise the associations which your subconscious links to it, and to lighten the auric quality of the substance through the vibes of love, then I will be able to control this body. If this will succeed, then my appearance will be in place of the demonized succubus. Just as the succubus before, you will be able to see and touch me then. The psychogon can become your nightmare or a step to spiritual completion."

"And how can I use this psychogon as spiritual tool?", Michael asked. "When we first met, I promised you to always be with you, to protect and love you. If you are pure inside, if you have developed love, then the subtle matter from which the psychogon has been built will be pure as well. Then it will be possible for me to vivify this pseudo-life and to control it with my conscious mind. I can be with you visibly in your immersion then, so that you can touch and see me. I will be with you as your companioness.

The higher you are evolved, the more your ego diminishes and you become one with the divine, the less your subconscious will control the psychogon and the more of my energy and consciousness will flow into it. When you live in total love, then the psychogon will be animated by my conscious mind totally and bring love to you as well. You and I, we could be together bodily through this chimera. We could be a couple like it normally wouldn’t be possible between a deity and a human. Your recent difficulties are your sacrifice for this possibility and mine as well, for I am suffering from it as well. But it is necessary to go through this process, so that we can be united once in happiness and love."

Below, a description of a Mongolian/ Tibetan Chod practice – the vivification of a Yidam (tutelary deity). 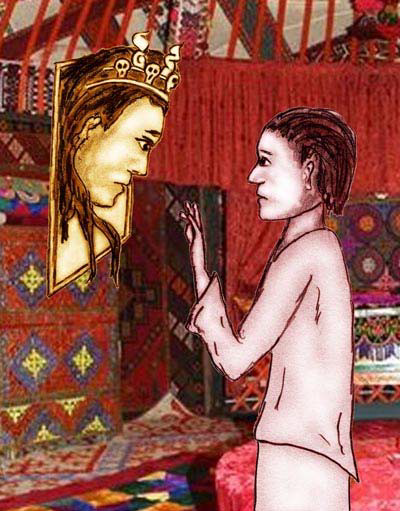 Mongke was told to meditate in front of the image of Yama, until the god would come alive before his inner eye. This kind of meditation sometimes was common in Tibetan monasteries. Thus, Mongke meditated in front of the image, day and night, whenever time permitted. At times, he was tired out and fell asleep for short moments – moments, in which he sometimes saw Yama before him as an afterimage, sometimes the glowing of a butter lamp or some less important image.

Meditation and ritual tied a bond to Yama, becoming ever stronger, and the image gradually began to come alive. In the flickering light of the candles, Yama’s eyes on the image began to shine now and then; at the beginning only for a moment and hardly perceptible. Then the eyes seemed to move and to look at him. Later, out of the corner of his eye Mongke saw that Yama’s head inclined and turned around, as if the scroll painting was a window frame through which Yama was looking. When Mongke looked more closely, the image was motionless again. Mongke, who had had his Lama initiation now, noticed Yama’s growing interest on him. Over time they became acquainted with each other. Sometimes it seemed to Mongke as if Yama would speak to him in his thoughts, and after some time he saw with his inner eye – like a plastical imagination – Yama in the room, as if he would dwell here, too.

The monk’s relation to the death deity changed. While at the beginning, Yama had been a grand, terrible appearance, he now became more familiar to him, and later even became a fatherly friend. But the aim of the meditation was to become one with the tutelary deity; so Mongke went on meditating.

One day, Mongke had his essential vision: He was Yama! As Yama, he was in the centre of a big ritual hall. The light was dim, the room only lightened by few butter lamps. He stood there, great and mighty, and with his horned buffalo head he nearly reached the hall’s ceiling. Cowering at the ground in a big circle following the walls of the room, there were monks, staring at him. They had stopped their ritual and had nearly forgotten it at the unhoped-for sight of him, and were entranced by what was happening. Mongke, as an appearance of Yama, began to spin around and drew a circle of flames around him by pouring blood out of his skull bowl; as the blood hit the ground it immediately turned into red flames. And he span around faster. Like a whirlwind he was dancing around in circles – it was the visible expression of his energy.

In his hand the skull bowl

The fire of life.

And he spins around,

Pouring out of his skull bowl

The cleaning power of fire,

Forming a circle of flames around him.

And he turns around,

The flames around him.

Life it is, which fills the world

Getting extinguished, and rising again.

And Yama goes on dancing,

In the second hand the Vajra,

Origin of all being.

In his heart he merges both,

And out of it he forms everlasting love.

Love that resides in everything,

In the grass, in the branches

And in the hearts of mankind.

With every of his fiery steps

He connects the hearts of many

And makes them beat in unison.

Past, present and future,

Listen to the all-pervasive sound of the bell,

It echoes through the hearts,

Uniting them in love,

Making them vibrate and glow.

Listen to the hearts beating -

That’s the fiery steps of Yama!

From now on, Yama lived in Mongke as his most inner nature. Only his body remained human, but he sensed and thought like Yama. Deep silence filled him, peace, and love to all beings. He felt connected and one with all.