Ectoplasm is a fascinating phenomenon. This phenomenon should not be disregarded so much in esotericism as well as in the natural sciences (this does not apply to South America, because there this phenomenon is much more investigated).

People who naturally tend to develop ectoplasm are called mediumistically inclined. This mediumistic disposition is inheritable.

Up to now, ether has been found only in living organisms. This is why in paraphysics the term "bio-energy" has established. Ether or bio-energy is physically unverifiable.

Ectoplasm is the densest manifestation of the ether and is very near to the material plane. It is so dense that it even can be photographed in certain circumstances and it is possible to make measurements. However, all measurements failed to provide exact informations (experiments of Albert Freiherr v. Schrenk-Notzing, 1862 – 1929, Munich, physician and parapsychologist).

Ether saturates the whole body and evaporates from it – which is the etheric aura. In its denser form it can be seen evaporating from mediumistic people. I have observed for myself how ectoplasm was flowing out of my mouth slowly and with honey-like consistency, whereat it vaporized at the edges. Ectoplasm flows out from orifices of the body, mainly from mouth and nose, but also from ears and vagina.

The Chinese people call this etheric energy "chi". According to Taoism, through sexual energy (water, abdomen) in interaction with fire (belly) a new form of energy is developed (chi), similar to the formation of water vapour through water and heat. That is why deities and Buddhas are often represented with a huge belly – a sign that they possessed a great amount of chi energy.

Perception of ectoplasm during deep relaxation (from a letter):

I had the full bodily sensation of saliva flowing out from my mouth during deep relaxation (sitting position).

Answer: this wasn’t saliva, but ectoplasm. I experienced this very often and thought that after the exercise I’d have to be drooled all over, but I was perfectly dry. As a repercussion effect (= astral body takes effect on the physical body) I usually had salivary flow at the beginning of my deep immersion. Since the deep relaxation always was interrupted when I had to gulp, I later used to let my head hang down so that saliva could run off. But my shirt was always dry after the immersion. When I saw ectoplasm flowing out from my mouth for the first time, everything was clear to me then. The ectoplasm looked like a broad stream of a grey, honey-like substance that steamed smokily.

In a higher and spiritual yoga, it is tried to transform etheric energy (fluidal, chi etc.) or, even better, its denser manifestation (ectoplasm) into Amrita – through clarification impregnation with higher vibes (love). Amrita is best described with "liquid light". The transformation into Amrita takes place in the regions of the so-called Tara Chakras (chest: Anahata Chakra and Hridaya Chakra; head: Forehead Chakra – not to be confused with the Ajna Chakra – and Soma Chakra).

Differences between ectoplasm and Amrita:

Effects: responsible for various paraphysical occurrences (spiritism); can be used for healing

It flows out from orifices of the body.

It is only released when this is intended or with the help of otherworldly guides. From the Amrita of the yogi/yogini, deities can form a denser body of appearance.

I have observed the following: the arms of subtle matter, which were created during trance from my energy and which I touched, were like a mass similar to chewy pudding or licorice mass. This mass contained some granulous material. So far, the description applies to ectoplasm. But the colour was that of honey – that doesn’t fit.

Another example: I saw a statue of G. It was about a half metre and showed him in a sitting position. The statue had a deep golden colour. I didn’t touch it, so I can’t say how the mass felt like. But so far the description applies to Amrita. But the statue vaporized at the edges! This again applies to ectoplasm. Thus, I assume that this is an intermediate stage between ectoplasm and Amrita. This means that this is possible – intermediate stages, I mean. The whole thing is literally a refinement of the own energy.

The alchemists called Amrita "liquid gold" (aurum potabile). It fills the body as golden fluidal and sanctifies it. There were (and still are) not only alchemists in Europe, but in India and China too. Maybe they have been there even earlier than in the Orient and in Europe. 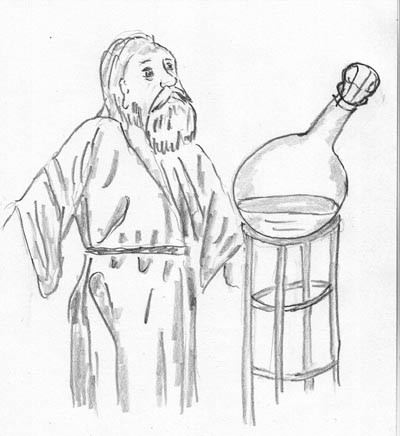 The Alchemist and the liquid gold

Amrita the Indian people call it, Aurum potabile the Europeans call it – that mysterious potion of immortality. He wanted to have this potion.

and tried many a formula.

A kind heart gave him a little phial. "This is from what Amrita originates." The alchemist was excited.

He will find the formula and destillate it by the litre, he was sure about that.

He found the substance, it was tears!

Angrily he threw the phial to the ground. He had been deceited,

he had been derided.

Instead of liquid gold he drank wine now. His head became heavy and he fell asleep. In his dream he heard the

following: "Tears of love it is!

They make you immortal,

they set you free,

they cut the chains of earth and let you soar up to the gods,

they are for what you seek."

He soon forgot the short dream. Work waited for him to be done,

a day full of destillation and cooking and reading of mysterious books.

Of course I have occupied myself with a bit of alchemy in the past, too, with symbolical alchemy and chemical alchemy, with the wet way. And maybe or maybe not with the dry way, the way with the force of the sun, which has been forgotten during the millenia. I believe I have found the dry way, at least for myself: it is the sun of the heart …