In theosophic teachings, the human astral aura is shaped like an egg surrounding the material body. This theory states that the aura does not become indistinct with growing distance, but instead, the aura has a well defined surface. This surface of the aura is elastic and if people are close together, the aura is compressed but does not mingle with the aura of the other person.

The surface of the aura has a special structure, the so-called "etheric web". This is a web of filaments of denser astral and etheric material and observed by clairvoyants as a web formed of thin, light emanating cords.

The etheric web shields the individual from intrusions and inhibits thought forms and earthbound spirits from entering the individual’s domain. In case of psychologically disturbed people, this etheric web is thought to be damaged. The damaged parts are described by clairvoyancts as black holes in the aura (the rest of the aura is seen as colored light). People with damaged etheric webs are in danger of becoming obsessed. Further on, these persons are helplessly susceptible to emotions of others as well as to suggestions of earthbound spirits. Compared to mediumistic people, the mechanisms of the way in which susceptibility works is different: in the case of mediumistic people, the sensitivity has its origin in the chakras, as opposed to the black holes of mentally ill or unstable people. The chakras serve as ports for different inputs and outputs – besides other functions – and can be closed and opened at will.

Observations of the auric web by Guru Ananda:

"The auric web encloses the human, shaped similar to a bell and at a distance of about 70 cm. The aura does not become blurred with increasing distance from the human body, but it has a clearly distinct shape. This outer boundary is formed by the so-called barrier web. This barrier web is an etheric-astral protective shield, which exists for the purpose of inhibiting the intrusion of foreign auric elements."

Guru Ananda, who had the ability to see auras, reported the existence of an auric barrier web that gives the impression of a barrier – like a strong spider’s web – which works as an obstacle when passing through it consciously. She perceived the auric web as being beige-coloured and having a fibrous structure.

Other examples for experiences of the etheric web:

Breaking through the auric egg (Gauri)

"I woke up and felt a pressure around me which seemed to come from everywhere. Everything was dark and narrow and I couldn’t see anything. It felt as if I had dived into deep waters. 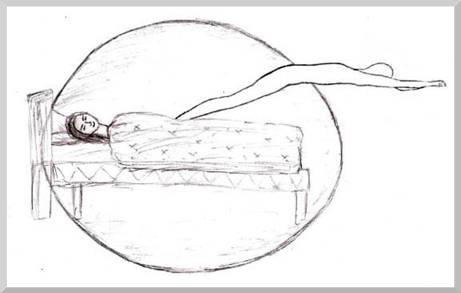 As soon as I became aware of my situation, I gently floated forward – without any effort on my part – as if I would make a dolphin’s jump in slow motion. As soon as I had shifted my body forward I felt that I broke through a barrier with my head. This barrier felt like the water surface, similar to when you’re coming up from the depths and break through the surface. I came out of the ‘egg’ and gently landed on the floor next to my bed. Still I couldn’t see anything and the blackness around me was all-pervading. But I had a tactile perception which helped me orient myself. After a few steps my vision came back as I grabbed hold of the walls."

"I experienced the existence of the etheric web only once so far. I was in my subtle body and I was blind and a bit dazed in that state, and I groped around me, trying to feel anything. At a distance of around 70 or 80 cm, there was an invisible, solid wall, which surrounded me completely. In the first moment I was a bit alarmed, but then I thought that this must be the etheric web, of which I had read about half a year before. I’ve never had experienced this directly until then. It was an invisible, solid and hard wall, which was impenetrable for me. Although I could ‘see’ something, there was only something dark with a dull yellow colour around me, as if I was stuck in a thick shell which was hardly translucent. However, I wanted to proceed, so firstly I just crawled on the ground, trying to go through the barrier. After a few seconds, my environment became dream-overlayed and I found myself in a dream of flying. I am not sure if at this point I was still in the proximity of the physical body or not. I had some energetic activity right after this, so I guess I was in the etheric body then. But the OBE continued to be dream-overlayed due to my lack of consciousness."

If the human’s subtle body is developed enough, it will loose more frequently from the material body again and again while sleeping, hovering a few centimeters above the physical body – a state which easily causes dreams of flying. Sometimes the astral body may take off a bit further – in this case it is likely the astral body and not the etheric body – and then there is the possibility of coming in contact with the auric barrier web. This is felt as an obstacle for the take-off, which is expressed in dream symbols that prevent one from flying higher:

In Muldoon’s view, these power lines are real power lines which are perceived due to their odic radiation. The following aspects are arguments against this theory:

"I was about to leave a house in Stadlau, when my awareness increased gradually. With more attention than before, I watched the environment in which I found myself now. I thought that it was completely different to the real Stadlau. Now I was interested in seeing my birth house and a moment later I was there, visiting the house and comparing the rooms to those of my memories. Then I left the house and rose into the air in order to return quickly to the place where I had started my excursion. But the street was traversed by power lines, so densely that there was not even a little gap where I could fly through. I wanted to find out if I would be electrified or if sparks would fly – as I had been reported by some of my friends when they told me about their dreams. Thus, I approached the power lines deliberately so as to break through them. What I felt was a kind of burning or electrification, which I can hardly describe because there is no similar sensation in the physical body. But the sensation was the same that I had in former experiences when separating from my physical body. In those, I sometimes had tried to pass a door, whereat I felt the door as a foreign matter that burned me. In this dream, the effect of the sensation was a general ‘bodily’ weakening. When I had passed through the power lines, I saw another web of power lines above me. As I was already feeling weakened, I was not motivated to make a second attempt. Thus, I glided back to the ground without perceiving any obstacle this time. Below, I found a lush meadow of dewy grass, where I laid down on my belly, stretching my arms and legs to absorb the earth energy. Indeed, I felt refreshed after that and so I was able to continue my journey." (Ballabene)

"I was flying very high over a vast, barren landscape. When I wanted to fly even higher, I noticed two ropes above me that crossed each other. Although there would have been plenty of space in between, I suddendly had the impression that I would not be able to break through. I knew, when I would arrive at the ropes, I could be electrified and then I would fall down. So I decided to go back to the earth. And I actually fell back to earth faster than I would have liked to." (DA)

"I was flying by night over the city, park and river. There were bow-taut wires in the air, which I did not see at first so that I ran into them. The wires sparked and I thought there was a short circuit somewhere." (Ma)

"My dear aunt and I were flying over a wonderful landscape. In mid-flight I saw power lines in the air. I knew that if we passed them I would be drawn back into my physical body. We ran right into the lines and in an instant I was back in my body, waking up with vehement jerks in my spine." (Corra)

"I dreamt of telegraph lines. Then I remembered that Swami Vayuananda was doing research about them at that time. So I approached the wires and tried to investigate their structure, wherefore I was biting into them. The substance of which the wires consisted was cold and like something between rubber and pudding, and it was easy for me to bite through them. The thought rushed into my head: ‘This is just like ectoplasm!’, and I was very satisfied with this newly discovered aspect." (Ca)

It is likely that in this dreams we experience a spontaneous separation, in which the astral body leaves the physical body without any etheric substance. In this case, the astral body has to break through the etheric surroundings. These can be felt as an obstacle, which is interpreted by our subconscious in dream symbols like described in the above experiences.

It is also known that some mediumistic people report, that in cases of obsession the spirits are often saying that they cannot leave the obsessed body because they are hindered by a magnetic field – this may be for the same reason: it is likely the etheric web which keeps them closed in.

Just a little hint on the dream symbols: I kept having dreams where I was enclosed somehwere and couldn’t find a way out. Walls and closed windows and doors hindered me from going anywhere and I felt caged. However, this was in a long phase during my life where I felt spiritually caged and had no opportunity to grow inside. Thus, the symbolism here was related to my inner problem and surely not to the etheric web. With this I just want to say that one should not forget that dream symbolism can have different meanings depending on the situation and on the individual.