Psychogons are denser and longer lasting than thought forms as they have been described in the previous chapter.

Psychogons are creations of thought which can become virtual reality to their creator through strong emotions and vivid imagination. They can be created consciously and willfully, but it seems that the subconscious creation of psychogons is far more frequent. In states of trance and, very rarely, in daily consciousness, one can see such a thought image appearing in front of him as an object or a person. If it has the appearance of a real existing person (or being), interactions can be caused – which is in fact sympathetic magic.

Out of all of the various appearances of thought structures, those are most interesting which represent replicas of persons or transcendent beings. In the following, I want to consider these forms of psychogons only.

There are many reports about apparitions, as which such psychogons are perceived in many cases. But reports are rare that include descriptions of the fluidal consistency of psychogons; the fluidal matter of which these are made of.

From “Lilith” (Alfred Ballabene) – in this short novel I integrated a personal experience which I have described precisely in the novel, except for the fact that it was not a succubus in my experience but the appearance of an acquaintance. In "Lilith" the following happened: one day Michael, the main character, had a crucial experience which was a big step forward for his knowledge about the principle of psychogons. He met the succubus which had been haunting him, but the succubus now was in a passive and not in an emotionally charged state. From Michael‘s log:

I had a Kundalini arousal, which gave me a pleasant, wave-like shake and continued for quite a long time. Actually I had experienced this many times before. The Kundalini waves faded away and obviously I was awake again. I stayed sitting in the armchair so as to continue meditating. From the street outside I heard four men as they began singing a Slavic song like a practiced choir. But everytime after a few words the joint chanting trailed off uncoordinatedly into single voices. It sounded weird and I concluded that these people must have been drunk.

The loud voices of the men were disturbing my concentration and now, that there was no point in meditating anyway, I opened my eyes. But to my astonishment I was not sitting in the armchair but in my bed. My amazement was even greater when I saw someone sitting next to me. The figure was like a grey, nebulous shape without sharp outlines. When the astonishment had passed I slowly realized that I was not awake in a physical, but in an astral reality. I was in a specific state which is called "False Awakening". "That‘s the succubus" the thought shot into my head. I looked more closely at the nebulous figure which was sitting beside me like an impassive puppet. The thought that I was dealing with the succubus made me wide awake and so I was able to think logically. I decided to inspect the seemingly lifeless figure more precisely and to do some experimenting.

Firstly, I tried to sense ist personality and auric radiation. But to my amazement I found that there was none. The situation was totally different to that of my nightmares. Obviously my panic in those nightmares had unleashed strong emotions which I projected onto the psychogon, thus charging it and bringing it to life. Now I was in a state which was emotionally neutral. I had not been thinking of the succubus, so that none of my energy had been flowing into it. For me the succubus now felt like a lifeless puppet.

In the next step I touched the succubus-psychogon. I knew that, in the astral planes, the character and nature of a personality could be sensed much more precisely and intensively through touching. But even now, again the figure was an object without life, without any personality traits.

Then I had the idea to examine the consistency of the succubus-psychogon, and if it would maybe react to any actions. I began to knead it. It was like kneading pastry or plasticine, only that it needed no real effort and there was no noticeable resistance from the mass. The nebulous figure was easily deformable.

Michael could easily deform and knead the figure

The above personal experience, embedded into the novel, cast a new light on a number of things. Of course I already knew from Leadbeater that thoughts and emotions could become manifest in subtle structures, but to experience these things on one’s own still is different, especially as it was a pseudo-life and the appearance of a person. As I understand it now, the willful creation of a psychogon is not black magic but rather neutral, regarding the occurrence itself. Only in the use and the underlying intention the ethical and thus the karmically effective qualities come up. Obviously, psychogons are relatively often generated unconsciously, at least by mediumistic persons.

As soon as I had studied and better understood the characteristics of psychogons, I found them more often in unconscious and conscious OBEs. That meant that I gained more experience and therefore could enhance my knowledge. Subsequently I met psychogons in the astral layers for several times. They were passive pseudo-lives, which were standing around somewhere.

The following experience during an OBE was memorable and humorous to me:

I was in daily consciousness and aware of being in an out-of-body state. I was strolling along the street and watching my surroundings. Then I came to a house with a great, wooden door. Just next to the door, a woman was standing and scolding at a nebulous silhouette which was at her side.

I tried to sense the thoughts and emotions of the woman and I realised that she thought that it was her standing husband next to her. I watched for a while and then I told the woman, that her husband was not present and she had to be mistaken. Moreover, I said to her: "for a quarrel it needs two". She looked at me, astonished. At the same moment the nebulous silhouette vanished. The woman gazed at the place where the figure – her assumed husband – had stood before and now instead she saw nothing there. Slightly confused she hurried away. I went after her, it was not a long distance, and I saw that she was going to a phone box and calling her husband. She seemed to talk to her husband on the phone and to hear an imaginary voice now. However, the telephone call was more conciliable. (Alfred Ballabene) 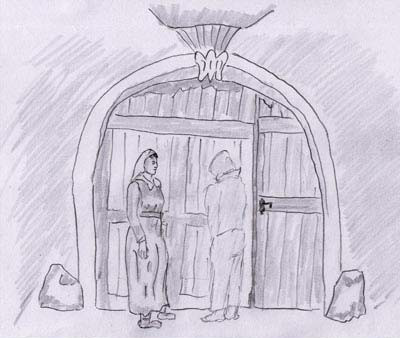 The woman was scolding at a nebulous figure