Charging of Images and Statues

Any object can be charged. In miraculous images and statues this is especially obvious. They are the most common target objects for the processes described in the following – thus the heading above.

In many cases of sacred images and statues, religious people build psychogons while looking at the sacred object, which are exact pictures of the respective image or statue. In this way, the image has gained an astral overlay. But what is special is the fact that the astral overlay is easier to move than the matter of the object. This movement sometimes can be perceived by devotional people, as shimmering eyes or as a smile. It is the astral overlay which seems to be smiling to the person, not the image itself. In their unbiasedness, these people often believe that the material image itself has changed. They get resentful when other people standing by didn’t have seen it too and cast the blame on lacking attention of these people.

Unconsciously, many religious people build thought forms of their deity. If those people are visually and mystically inclined, it can happen at least that they sense a presence of their deity, connected with a vivid inner image. This process can be enhanced through altar images and altar statues – the overlayed astral image is an intermediate step to the building of a very dense psychogon which is able to build an appearance.

In religious or mystical practice, sacred objects are charged consciously (Sanskrit: Murti). According to how much emotionality and imagination flows in, the charging process will more or less cause a reaction. With the image or statue of the deity or saint, it is easier to give those mental creations a form. The statue or image is like a mould for a psychogon which will take on a life of its own later. If this process of vivification is successful, then, in a first step of transition to independence, those psychogons go out of the statue and build an own reality within the room.

On this, here a poem written by me: 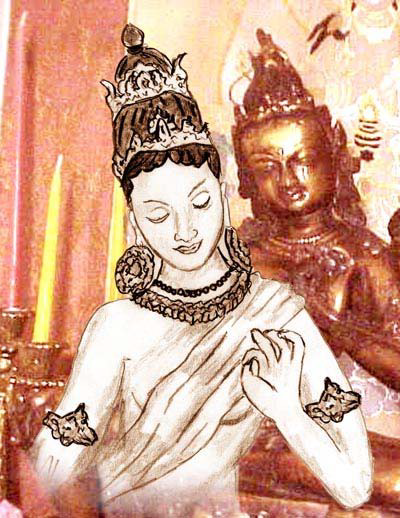 Lovingly, I look at the statue

Image of Tara, Maria and Gaia all in one.

Formerly it was made of dark metal,

I gave to it the bright shine of gold

and silver to the Lotus beneath her feet.

Her hand raised for blessing,

her face showing a benevolent smile.

But still, Tara is far,

metal it is what I see before me!

At her feet, I put candles,

In the light of the flames,

her body is iluminated.

My thoughts are silent,

my heart begins to speak.

Her smile, at first only seen with the eyes,

I begin to feel now.

A breeze of life swirls around her image,

born of longing and hope now.

My sensations are changing,

what was metal, is love now.

Still, it is deceit,

for my encounter still is outside.

Slowly my heart is warming.

The warm turns into embers,

the clouds give way to the morning light.

There, I sense red-golden rays,

the morning sun rises in my heart,

the outer world drifts far away.

It is not candles now,

it is the red gleaming sun of my heart!

From its light now,

Tara’s body is forming stands out from the metal,

enters my heart, to rest here,

to look at the world from here.

Her love becomes my love,

my eyes become her eyes.