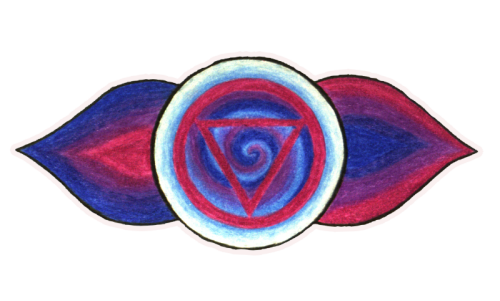 The Ajna Chakra (or Brow Chakra) lies between the eyebrows and traditionally it is depicted with two petals. After Leadbeater it possesses 2 x 43 (= 96) petals, whereat one half is coloured in pink with a golden-yellowish tint, and the second half is blue-violet. In the modern "rainbow theory" it is depicted with a blue-violet colour.

Location of the Ajna

The Ajna Chakra has an opposite chakra in the medulla oblongata:

In his book "Wissenschaftliche Heilmeditationen" (German edition), P. Yogananda writes on using the Ajna Chakra when willpower is needed, and to use its opposite chakra when one wishes to work with mental imaginations. He describes both chakras as being the positive and negative poles of one and the same center. In this center, the intelligent life force resides. When looking with calm concentration on the place between the eyebrows, the energetic current running from the eyes is described to reach first the Ajna Chakra, and from there, it runs to the opposite chakra in the medulla oblongata. In this way, one is believed to look into the astral "spiritual eye" of the medulla oblongata.
(cf. Paramahansa Yogananda: Wissenschaftliche Heil-Meditationen. O.W. Barth Verlag, 1971, pp. 50-51 – English version: Paramahansa Yogananda: Scientific Healing Affirmations. Self Realization Fellowship, 1986)