The Dark Side of the Present Zeitgeist – The Apocalypse

The apocalypse an be seen as a model for the decline of a civilisation. This model applies to our present civilisation. It is characterised by two states: 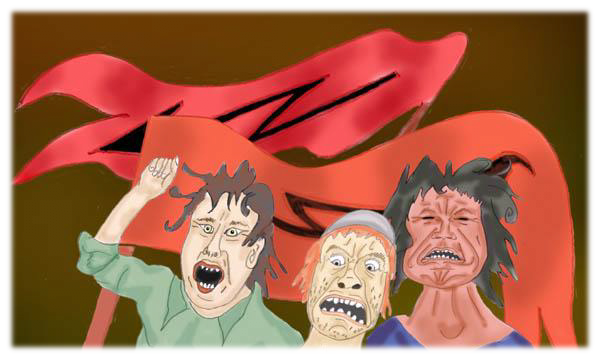 A Civilisation Disease: Depressions because of Lack of a Purpose in Life

I’ll describe here a special form of depression and the counteractions that may be taken to face it. This depression comes as a side effect of our civilisation and it especially affects sensitive people.

Our civilisation is characterised by a lack of purpose and meaning in life. The people’s lifestyle is oriented on consumption in a suggestive way, whereat different companies try to exceed each other with their offerings of promising products and services. Consumption is put on a level with well-being and a fulfilled life. But this can never work. The inner human being feels the emptiness which is connected to this lifestyle of consumption. The inner emptiness deadens that drug-like happiness which the people think to reach with material values. There is a clear shortage of meaning and purpose of life. For what reason do we live at all? What is the meaning of life? What would really make us happy?

The answer would be an inner attitude that bases on the belief that we will survive our physical death and continue to exist in another dimension.

It seems that life problems are the reason for occurring depressions. But life problems and the ways of solving them are strongly related to the corresponding civilisation, including the way of thinking and life strategies that characterises this society. This fact is often ignored. Therefore, I want to point out that one of the main causes for depression lies in the empty lifestyle of the recent consumer society. We are living in a decadent time without deeper spiritual values. Working and consuming isn’t a spiritual value. Working is, more or less, a necessity, and the excessive consumption is a drug to conceal the lack of inner values.

I don’t want to suggest a specific ideology as a remedy for this. Any religion that teaches principles of ethics gives our life a deeper meaning and helps us to gain strength through the belief of an existence after death. It is a cure for us and can be fulfilling. Basically, all religions teach these values. They are the essential messages that can shape our life in a positive way and give us strength. We should consider this and not become intolerant just because of ideological details.

Here an excerpt from the ebook "Die Gräfin" ("The Countess", currently no English version available). It is a sermon. It cannot harm to listen to a sermon for a change, I think.

"Although the Christian belief was given by the son of God to mankind, this does not mean that the people have understood this belief in its deep – they are far from understanding it completely. Religion is deeply connected with the soul of the people. The message of Jesus may have been absolutely pure, but still the people are obscured in their mind and feelings because of their body with its instincts, wishes and egoism. Due to that inner obfuscation, regardless of its extent, the people have interpreted the words of Jesus in their way.

In the same way as a human grows and develops during his life, Christianity had to grow and to go through a process of inner maturation concerning their beliefs and religious practices. In medieval times, Christianity was like a child that lacks empathy and is ruled by egoism. Intolerance and the belief of being superior to people of different faith led to war and to persecution within the Church. Thinking that they were serving their religion, they acted against the message of Jesus, which originally was a message of love.

Yes, as a single person learns and grows, this also applies for the different nations and peoples – although in this case we have to consider centuries of development, and not years or decades. In this way, our western Christianity has learnt much and has become more mature by now, though it still is far from wise. To draw a comparison", the bishop sighed, "if we would compare western Christianity to the development of a single person, we would conclude that it now has reached the state of adolescence. What are the characteristics of adolescence? There is a separation from the former obedience to the parents. But the way until the person learns self-responsibility is still long and, throughout this process, it often happens that the valuable heritage of the parents is rejected. This applies for our present times, and the consequence is a loss of ethics and morality. Even more: the knowledge of the meaning of life was lost, too, and was replaced by disorientation and often depression. The people try to escape from the latter by distracting themselves.

Let us learn from the fate of the countess, let us pray for the countess and for our Christian Occident, so that it may find again deeper inner values."

However, there also exist many people with idealistic and religious, spiritual values and attitude, but still they suffer from depressions. This article also intends to give support and help to these people, especially in regard to how they can see through the influences of the modern society and how they can overcome them, if these influences are negative.

Perils of the Present Time
(Contribution from Durga)

Although it seems that the individuality of a single person is emphasized, the truth is that it’s the opposite in the society. To have a special tattoo isn’t a sign of individuality. A pseudo-individuality is propagated, since the human being is more and more standardised as if it was a machine. Society deems it important to take every individual character from a person and to adapt people to the official standard. A part of this is the permanently increasing pressure to optimise yourself, which is controlled by App: blood pressure, calories, heart rate, step counters and health trackers.

There exists an enormous pressure to be "healthy" in the sense of fit and good-looking. It even occurs recently that companies offer health programs for their staff.

It is a kind of brainwashing that can be observed here and that is made to distract people from the essential things. You have to have a certain appearance (handsome), a certain kind of healthiness (fitness) and you have to be in a good mood. And you have to tell this to others frequently (messenger) and to compliment each other on this. Narcissism and egocentricity are thriving. There is an ongoing process of "destruction" of what human existence could be in the best sense – this would be an existence where every human being is something special, an unique phenomenon, that is enriching our society due to its uniqueness.

Depressions could be a quite healthy way of resistance. Because IF I would adapt to the standards and then try beginning to listen to myself, what would be there? Nothing would be there, except for unhappiness – because I have abandoned myself by trying to "belong".

If, in a sick society, people react with sickness – well, isn’t that a very "healthy" alarm signal?

"I’ve read your article about depressions. What it says about the zeitgeist and the present life matches with what I am observing since long: that our lives are robbed of all meaning. We are supposed to be functioning, to optimise ourselves, but the soul is simply forgotten. I have experienced this myself, because in my job a lot of colleagues are such ‘self-optimisers’, they are tracking everything with fitness wristbands and they even try to force the others on doing the same. They present this as an ideal. If you don’t join in, you will be regarded as not meeting the norm and be judged with disparagement. I was told (by my employer) that I should be ‘more proficient’, too."