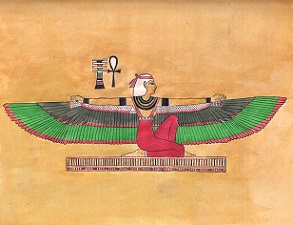 Maat, Ancient Egyptian goddess that keeps the worlds in balance and order

In most religious traditions, the world beyond is subject to a principle of reward and punishment. This had proved useful to teach people social discipline by means of fear of hell. But such a system of reward and punishment needed a judicial authority to guarantee justice. This required that God intervened in the individual fates of people (only humans were believed to have fate, the rest of nature was only considered as scenery and food supply).

According to more recent ideas that assume a self-organising creation, it is psychic laws that determine life in the beyond. Here, the following rule applies: