Dream Symbols and their Origin

Ch.: "I see a lime-green cactus without any thorns. It has this characteristic rosette shape out of which smaller and smaller leafs grow. On top of the plant is a beautiful pink flower. While I am looking at it bewildered I hear a voice that says: "Whoever sees the basic material of dreams can read them like storybooks." I wake up and am happy about this friendly message.”

Dreams are a visual language

Before we start thinking about dream symbols, we should first think about the nature of the dream language. Our verbal language is based on tonal vibrations which follow a linear flow. Our words are formed by sound modulations which build our language. Sometimes this tonal language also occurs in our dreams. Primarily, however, dreams are a metaphorical language. Imagine you were deaf and mute but had something like a computer monitor on which you could create pictures without having much effort. Now think of a situation where you want to say something like: “I'm hungry.” How would you illustrate that message? Or “I'm scared.” How would you express that without using tonal language? You could only speak in an image sequence. How would you choose this sequence?

It is highly interesting to think the other way around. Not as the interpreter but as the speaker. The human race is using this language since millions of years and even today people who try to interpret dreams pay too little attention to the fact that dreams mainly use this pictorial language. The many peculiarities of the dream content are caused by this special kind of language.

Dream symbols and the world around us

The center of our organic grown consciousness is the brain. This organ is located in a bone shell and has to paint a picture of our surroundings by using only a few sensors. The amount of sensory input must be kept low. All the dots, curves and color patches that are registered by the eye represent a huge amount of information. The bigger the amount of information the longer it takes to process it. Because of the large quantity of input, the brain forms a number of layouts. The information flow into these layouts, which are not only form elements, but also filled with emotions and put into a relation grid. We find them in our dreams as symbols. If we think of dreaming as a neurological process these layouts are probably being related to other layouts.

The Hierarchy of Symbols

In the introduction I tried to portray the dream imagery as a product of a cerebral process. If this is the case then one can assume that there has to be a hierarchy in the meaning of the symbols. It is essential for the brain to decide quickly what is important and what is not. This decision is made really fast. Only after an object came into main focus, it gets analyzed more closely. That means only after something seems to be important one takes a closer look or listens more carefully. Furthermore, the symbolic contents are structural elements and have to form according to rules which are the same for all human beings. The options by which symbolic elements form, have been established by evolution. With the help of simple questioning we come to a scheme that shows us which elements are essential for the surviving of an organism (here mankind). We can conclude that the human himself is the most essential element. He stands in the center of his own interest and therefore also in the center of all symbol forming. This focal point, which is the human himself, is not only a philosophical abstractation but a physical structure with options for actions and perceptions. The organs that are making action and perception possible, are the interface between environment and human. The human being assesses the environment with these organs. For that reason the top elements of the hierarchy of symbols, consists of contents that contain our anatomy and sensory organs. The actual environment is being judged from this point of view.

An example: At first glance, the four cardinal points seem to be logical and natural. There are two directions where the sun rises respectively sets. The other two directions indicate where the sun stands in zenith and of course the opposite direction. Due to this, no one doubts that this classification is a cosmic natural fact. Indeed, the sun is moving on circular arc and appears and sets at different places around the year. Actually, there are no real four cardinal points. Mankind is “freezing” the dynamic movement of the sun and forms it into a cross of which he himself is the centerpiece. From this viewpoint, he is splitting up the world in four directions and zones. Here we have a symbolism that results from the human anatomy and therefore belongs to the top elements of the hierarchy of symbols. It is a structure-forming orientation element that is being projected upon the environment.

The origin and root of our orientation and judgment of the world is our body. Our bi-symmetrical shape has two main directions of operation and (visual) perception. There are also two intermediate regions. These two main directions are the degrees of freedom of our two-dimensional world namely the surface of the solid ground. There are more directions that we can somehow perceive, which however do not below to our habitat. These two are up and down. We can only look up to the sun, to the stars and clouds and birds. What is underneath our feet stays hidden.

We could read off a huge amount of symbols from our environment. The program in our brain, which is responsible for the decision making, has to find the priorities in the  environmental elements. 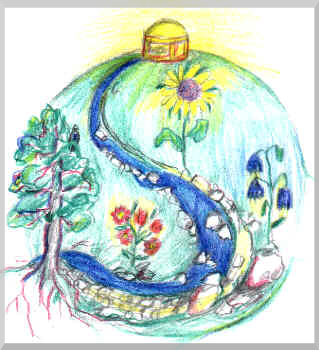 What is important is being decided by our biology. Important to us are those elements that are essential for our existence and self-preservation. Some environmental conditions have been critical to our species and its evolution for millions of years. These conditions have been incorporated into the instinctive behavior and were also decisive elements for the physical designs of creatures. Because of their archaic meaning these symbols will be named as “cosmic” symbols.

Some important symbols in this category:

Examples will be given in the chapter The Four Elements.

3. Symbols from our Civilized Everyday World

These symbols are standing lower in the hierarchy than the “cosmic” symbols. An example for the dominance of a “cosmic” symbol over a everyday world symbol: We are in a room, maybe a basement or a living room. The most important thing for the classification (conscious or unconscious) are the lighting conditions. Light belongs to the second hierarchy level. The light, however, is only a “cosmic” aid and subordinated to the eyesight and its resulting recognition.

Examples can be found in the following chapters with the main subjects:

4. Symbols from our Individual Life Experience

These are not only single symbols that everyone has to discover on his own. Rather more, they also show nuances of symbols of higher hierarchies. We must not forget that symbols are built from our individual experience and therefore always have a personal touch.