This "twelve-petalled" chakra is rarely mentioned in literature. Its white petals are pointing upwards. The Forehead Chakra can be experienced and developed as center of bhakta (= cosmic love), whereat it often takes the colours of the Anahata: orange and rose-golden. Compared to the Ajna Chakra, the Forehead Chakra is about 2 – 3 times bigger (at least it was observed and felt in this way in our Ashram). Further effects of the Forehead Chakra are increased eidetic abilities (seeing mental images), clairvoyance and astral projections (in some OBE methods it can be used as a "tunnel" for astral projection). It is a kind of magical mirror in which one can see everything.

Location of head chakras, as felt in trance: 1) Crown Chakra, 2) Forehead Chakra, 3) Ajna Chakra. The other centers at the back of the head, which were rather vaguely felt, are most likely opposite chakras.

"… there is a hitherto ignored difference between a small center between the eyebrows with a size of a 10 groschen coin (old Austrian penny), and another center with a size of a 100 schilling silver coin located at the middle of the forehead. The more active center in me is the latter one. It is also the one which slightly resonates with the Anahata. In colour it is yellow, golden or white." (S.)

"In the lesson with Guru Ananda, A. B. read a pre-meditation: in this pre-meditation, the practitioner walks through an autumnal landscape, reaches a house and in silence he waits for a certain threshold symbol – a gate that opens up suddenly.

At this point, I suddenly found myself in bhakta (love), the Forehead Chakra was activated together with the Anahata Chakra. In the imagination – that became independent at this point – now something like a window or door opened. Then, for a moment, I saw a golden-yellowish, longitudinal-oval center of light. At the same time, a feeling of an intensive inner connection to Yogananda came up inside of me."

Feeling and seeing the Forehead Chakra in an IBE (Corra)

"On this morning, I achieved a relatively short immersion state – after at least four attempts in vain. As soon as I really was in deep immersion, I concentrated on my Forehead Chakra. I had planned this before because I wanted to have an astral projection. The Forehead Chakra got energized very soon and it was the first time that I could actually feel and almost see it: I perceived it as a shining, pulsing orb of energy in the middle of the forehead (not between the eyebrows, but more or less exactly in the middle between hairline and eyebrows). I couldn’t really ‘see’ it, but I clearly felt it and before my inner eye, everything was colourful and bright. Then, my Forehead Chakra began to vibrate intensely, and energy waves were running on the surface of my etheric body downwards, so that my body was tingling slightly. I kept concentrating on it so as to ‘come out’, but it didn’t work. So, in the end, I just sat up as I did usually. Maybe this was a mistake, because the OBE afterwards was quite ‘normal’ and rather ‘heavy’, and I struggled to see something. I was out with my etheric body but hadn’t managed to come out with my astral."

Concentration on Forehead Chakra as an Aid for Astral Projections (Corra)

"I was in a dream-overlayed etheric state, still lying in my bed, but with dream scenery around me. I ignored it and concentrated on my etheric body, where I could feel the energy flow. This feeling of ‘energy flow’ - like water or wind on the body surface – was strongest in my Forehead Chakra. I could clearly perceive the chakra vortex rotating. I just had to concentrate on this vortex and at once its activity increased and my etheric body began to separate from the physical. So I just kept focusing on my Forehead Chakra and in this way it was very easy for me to come out of my body, whereat I was fully conscious, standing upright in my dark room." 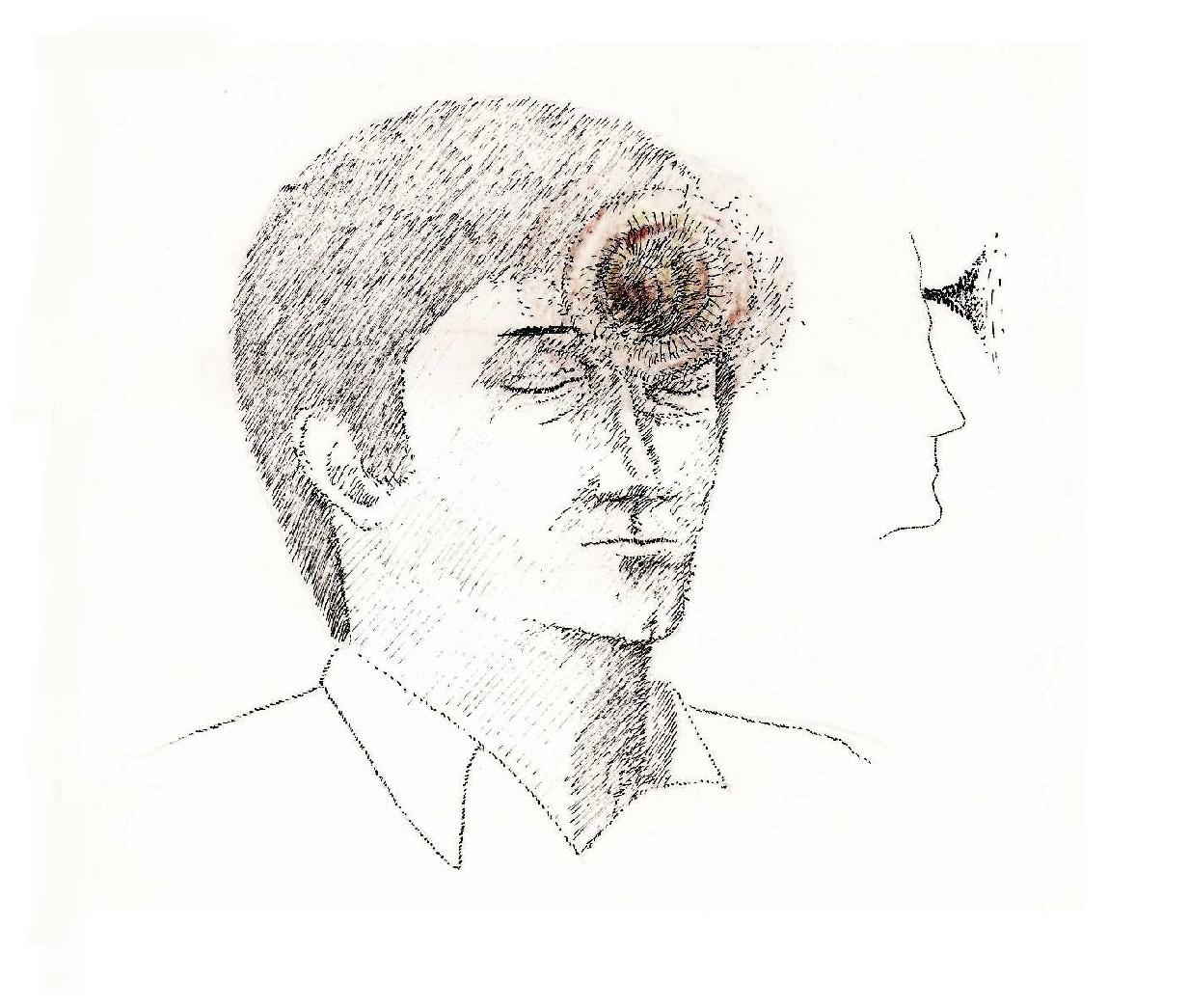 The Surya Chakra is the Sun Chakra. After Indian tradition, it supports the effects of the Manipura Chakra, but is less important than it. After Leadbeater and the theosophists, however, it is the other way round: here, the Surya Chakra (which Leadbeater calls Spleen Chakra) has a more substantial role than the Manipura Chakra – because of its importance in mediumism. It lies on the right side, a bit above the navel (spleen). Like the Manipura Chakra, it is the seat of Samana Vayu – the form of energy that is responsible for the assimilation of the absorbed energies in our body (for more information about the idea of the vayus, see chapter "energies").

The Surya Chakra has the task to absorb energies from the sun and it is responsible for subdivision and allocation of the vital energy. According to the teachings of yoga, this ability decreases with the age of the person. The absorbed sun energy is subdivided into six currents, which is why this chakra is associated with six petals. The petals (fields of vibration) have different colours – red, orange, yellow, green, blue, violet – and they are shining brightly and sun-like.

As already mentioned, this chakra is of great importance for mediumism. Its activity is responsible for all etheric phenomena as the are known in spiritism and also in OBEs. Various etheric phenomena, from ectoplasm to the silver cord and experiences of being harassed by earth-bound spirits – all these are resulting from a strong activity in this chakra.

People who deal much with lower magic ( that means, with effects on the physical plane), i. e. who set free a lot of etheric substance, get diseases of the spleen, liver and gall. These diseases are a result of overactivity of the Surya Chakra.

The Chandra or Liver Chakra is the polar counterpart to the Surya Chakra and is associated with the moon and with all the energies that are connected to the moon. It lies on the left side, slightly above the navel (liver). The function of this chakra has a harmonizing effect on the Samana Vayu that has been explained above. 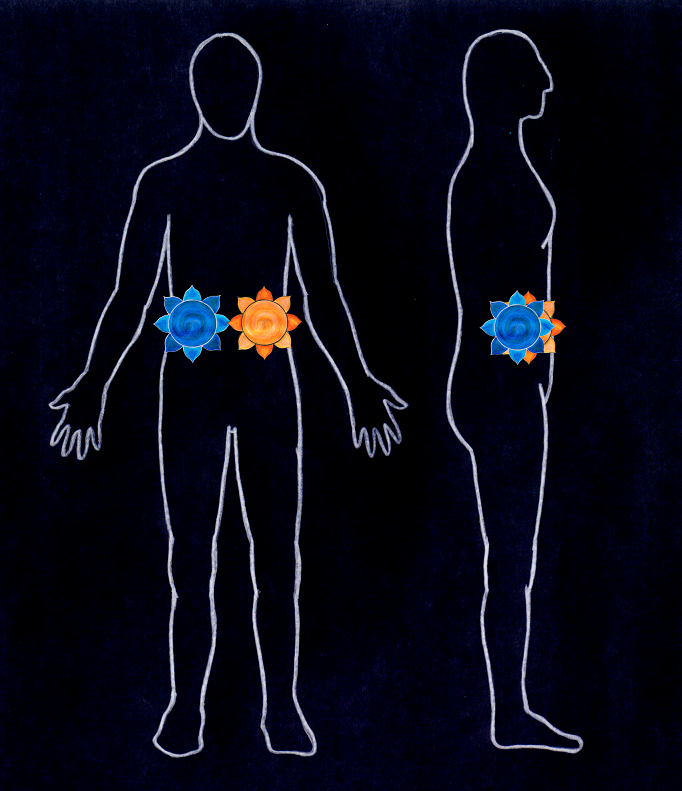 Energetic Perception of the Surya and Chandra Chakra (Corra)

"I was out in my astral body and as I tried to meditate in the astral state, I suddenly felt energy in my upper belly, at the height of the liver on the right side and at the height of the spleen on the left side. I could clearly feel the rotating funnel-like vortices, and they rotated very fast, so that it was quite a bit uncomfortable in that region because it was so intensive. It increased to such an intensity that I was drawn back into my physical body."

Opposite Chakras of Surya and Chandra (Corra)

"I had been meditating while falling asleep, and immediately after I had dozed off, I woke up again, but in the etheric state. Everything was dark around me, but there seemed to be ‘something big’ hovering above me. Suddenly, a strong energization began in my back. It was especially strong in two vortices on the left and right side of the back, more or less exactly opposite to the spleen and liver, so I thought these had to be the opposite chakras of the Surya and Chandra Chakra. The vortices were rotating as if drilling into my back; it didn’t feel negative, it was very energizing and uplifting, but very intensive and nearly unbearable at the same time, like electricity. This intensive energetic activity required my whole attention. While this energization was still shaking me, I woke up in the physical. My body felt very hot in the regions where I had felt the vortices before, it seemed to bubble with energy like a hot spring."

Comment (by Corra): just for information – there seems to be some confusion about the Hrit Chakra and the Surya Chakra (similar to Manipura and Solarplexus Chakra). I experienced two chakras on the left and right side below the Solarplexus and referred to them as Surya Chakra on the left and Chandra Chakra on the right side. I also referred to the Surya Chakra as being a different energy center from the Hridaya Chakra, although this may collide with other descriptions.

Beneath the Anahata Chakra lies the Hridaya or Hrit Chakra. It is also called Ananda Kanda. It has eight petals and it is depicted traditionally as a red lotus. This chakra is the meditation chakra for the deity or the inner divine guide. As a meditation chakra, the Hridaya Chakra is ornamented plentifully: it is an island of gemstones, with an altar on it, before which the yogi worships his Guru in deep meditation. So at least in the traditional depictions.